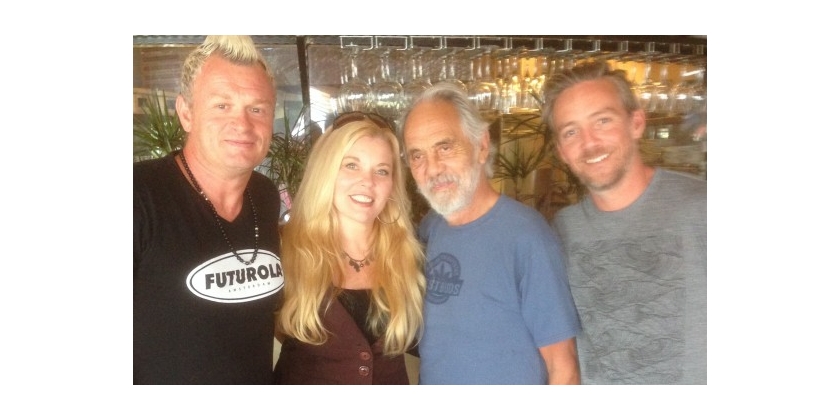 Headquartered in “the smoker’s capital of the world,” Amsterdam, Netherlands, Futurola opened its first U.S. branch office in early 2014 to bring its line of premium smoke accessories to legal medical marijuana patients and American smoke enthusiasts nationwide.  The collaboration, which unites Europe’s top brand of smoker’s equipment with America’s most famous toker, will feature a co-branded collection of roll-your-own essentials including fine, handcrafted rolling papers, herb grinders and Futurola’s patented rolling machine -- the only device on the market which rolls cone-shaped cigarettes, the preferred style in Dutch coffee shop culture.

“I’ve visited Amsterdam many times over the years and always enjoyed Futurola products when traveling abroad,” stated Tommy Chong. “While there’s been many new ways to consume cannabis, there’s still nothing quite like the experience of rolling your own natural herb in the finest chemical-free papers. Futurola has perfected the best equipment for the art of rolling.  I’m excited to be working with them to introduce this line to the U.S.”

Futurola’s exclusive line of Tommy Chong smoke accessories are expected to begin hitting medical marijuana dispensaries and smoke shops in both Europe and the U.S. as early as November, coinciding with a special promotional event showcasing the collection at the 2014 High Times Cannabis Cup in Amsterdam, November 23-27, 2014.  Chong fans with plans to be in Amsterdam on November 29, 2014 are invited to enter a special contest to get “Lifted and Drifted” with Tommy Chong.  Grand prize winner will attend a private dinner aboard a boat through the Amsterdam canals to a coffee shop for a chance to smoke with Tommy Chong. Ten runners up will receive a premium gift box from Futurola.  Follow @FuturolaUSA on all social media or visit www.futurolaUSA.com for information on how to enter.

About Futurola:  Since 1996, Futurola has been Amsterdam’s leading brand of rolling papers and smoking equipment.   Founded by brother and sister Evert & Yvonne Brandenburg, Futurola’s roots date back to 1984 when the siblings opened the popular coffee shop, “Future” near Central Station.  The Brandenburgs expanded their family business with the launch of Future Bags in 1989, a wholesale storage bag company, made from sustainable materials, designed specifically to meet the unique needs of the coffee shop industry.  The duo continued to set the standard for excellence by developing their signature line of high-quality rolling papers and roll-your-own equipment, spawning the renowned Futurola brand in 1996.  Now widely recognized as Europe’s top brand of hand-crafted rolling papers, rolling machines, and superior smoke accessories, Futurola is expanding their operation by bringing their signature line of products to the U.S.

Iconic actor, best-selling author, and Grammy Award-winning comedian Tommy Chong is perhaps best known as one-half of the legendary cannabis-fueled comedy duo Cheech & Chong which minted six gold records and released eight films during their reign, for which Chong also co-wrote and directed.  Chong went on to star in several films and television shows, including his regular character, “Leo” on the popular series, “That 70s Show.”

After a nine-month prison sentence in 2004 for shipping bongs to Pennsylvania, the comic became a passionate advocate for cannabis freedom and fairness.  In 2012 Chong announced he was battling prostate cancer and decided to combat his illness with a controversial cannabis oil protocol.  On July 5, 2012, he revealed that the cannabis treatment had been effective and he is now cancer free.  He continues to be an outspoken advocate for cannabis, which he credits for supporting his healthy and active lifestyle.

Your email address will not be published. Required fields are marked *